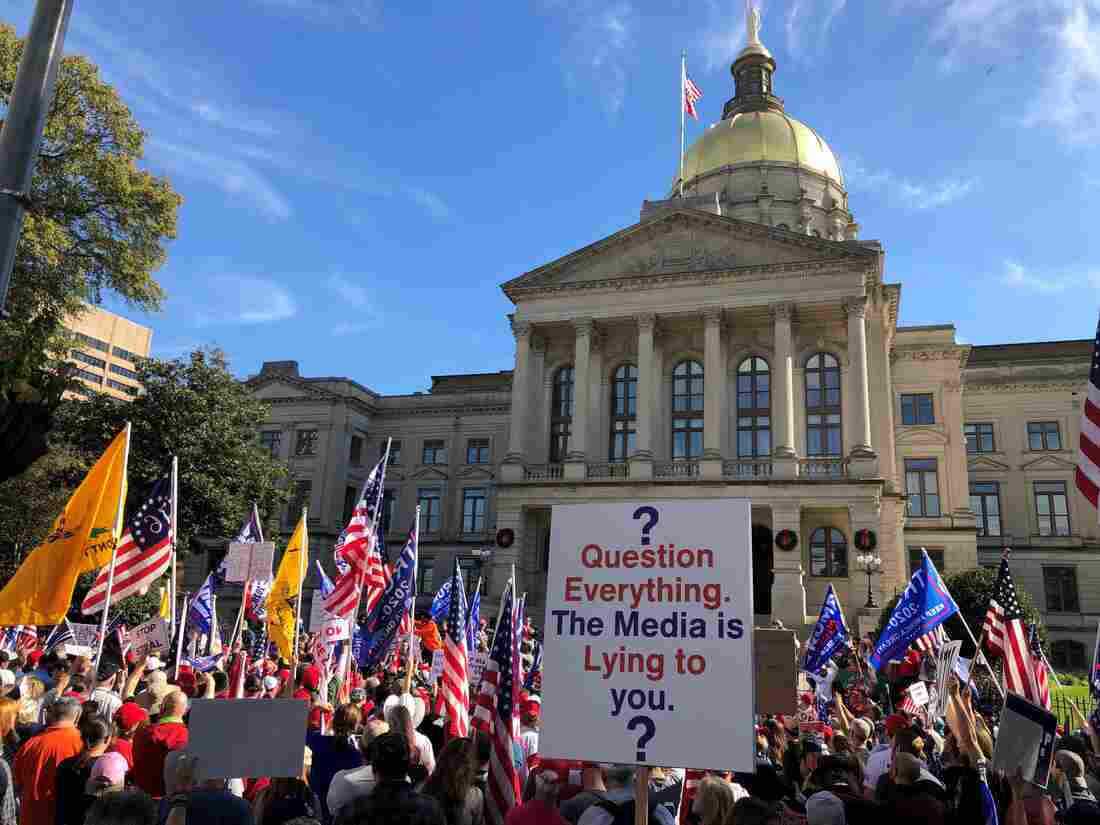 A rally organized by pro-Trump supporters to challenge Georgia’s election results, outside of the state capitol in Atlanta on Nov. 21, 2020. 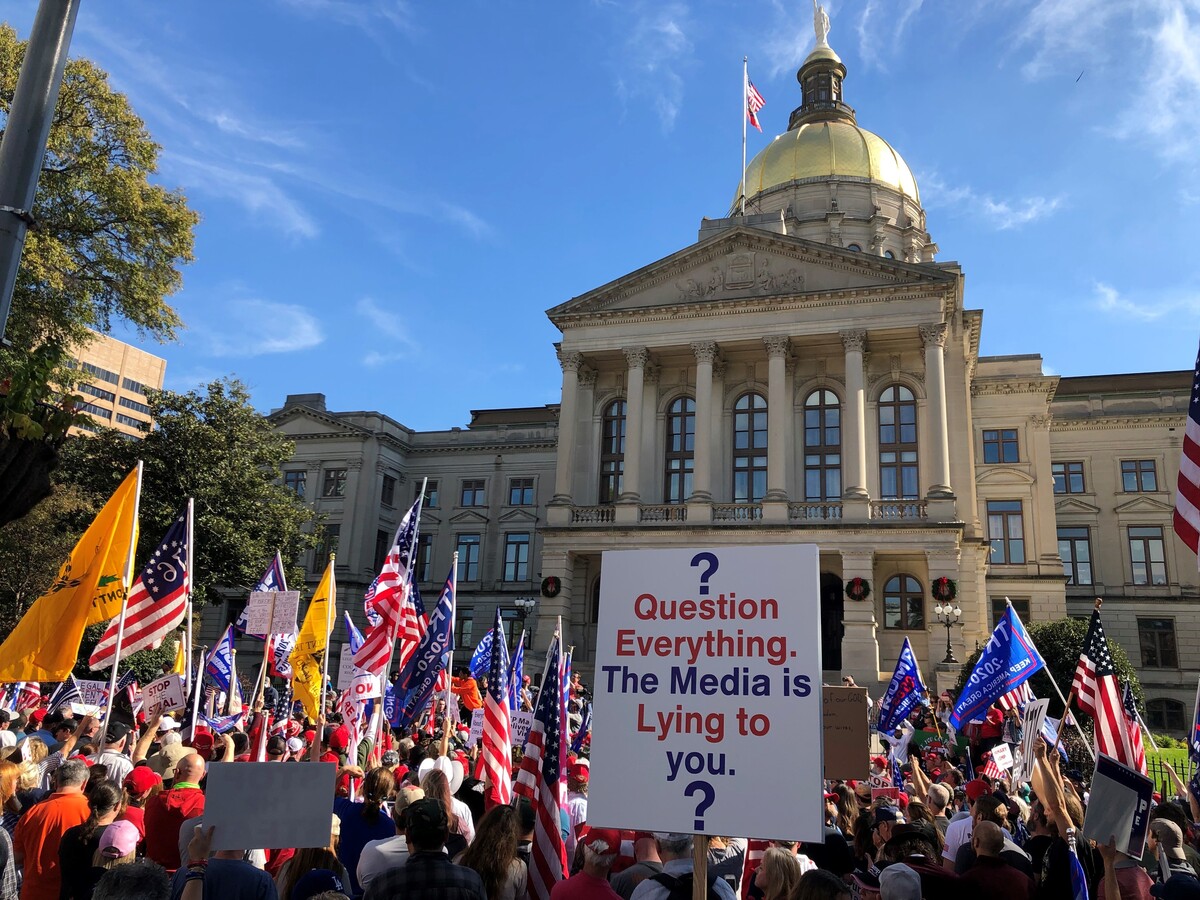 A rally organized by pro-Trump supporters to challenge Georgia’s election results, outside of the state capitol in Atlanta on Nov. 21, 2020.

High-profile supporters of President Trump took the stage in Georgia Wednesday to spread conspiracy theories and tell the state’s Republicans not to vote in the crucial U.S. Senate runoffs there next month. The outcome of those races will determine which party controls the Senate next year.

At the rally in Atlanta, pro-Trump attorney Lin Wood took the microphone, telling the crowd that last month’s election, won by President-elect Joe Biden, had been manipulated.

“Do not be fooled twice. This is Georgia, we ain’t dumb. We ain’t gonna go vote on January 5th on another machine made by China,” said Wood, who has no formal affiliation with Trump’s campaign. “You’re not gonna fool Georgians again.”

Poll suggest that many Republican voters have been swayed by Trump’s baseless talk that last month’s election was rigged against him.

Tuesday’s rally was one of several that have taken place since Nov. 3. At another recent rally, Missy Landers was one of hundreds of pro-Trump demonstrators who showed up outside Georgia’s capitol in Atlanta, unmasked and angry about unproven allegations of widespread election fraud.

“I’ve always voted and things like that, but I think we need to know what’s going on,” said Landers.

She’s the kind of reliable Republican voter Georgia’s GOP establishment is counting on to hold the two Senate seats held by Sen. David Perdue and Kelly Loeffler. Both senators failed to receive more than 50% of the vote last month and face Democrats Jon Ossoff and Raphael Warnock in runoff elections on Jan. 5 .

But like many Republican voters, she believes Trump’s false rhetoric that the election was stolen. And party leaders have begun to worry that message could deter voters.

“All of the news about the ballots, the electronic systems, all the different things that happen during the election and is continuing to come out. I don’t feel secure about it,” said Landers.

Georgia’s Republican election officials say there’s no evidence of any widespread fraud and say these conspiracy theories are “crazy,” and like a game of “whack-a-mole.”

The state certified its election results on Nov. 20 after a hand recount of approximately five million paper ballots. A second recount requested by the Trump campaign was completed Wednesday night and did not appreciably change Biden’s more than 12,000 vote lead.

“We’ve got to get a grip on ourselves people,” said former state Sen. Chuck Clay, who also once served at the state GOP chair. “What we can’t have is this sense of just conspiratorial madness that I think certainly does the body politic harm and I don’t think helps our candidates.”

Clay enthusiastically supports both Perdue and Loeffler. But as candidates, they’ve embraced Trump’s election fraud theories, calling Georgia’s 2020 elections “an embarrassment” and going so far as to demand that Republican Secretary of State Brad Raffensperger resign.

These messages, along with President Trump’s tweets, have clearly reached some Georgia voters.

During a recent visit here, Republican National Committee Chairwoman Ronna McDaniel responded to voters asking why they should participate in an election they no longer trust.

Chuck Clay says that Republicans who were upset by the general election results should dust themselves off and vote.

“Yeah, there are some people there that won’t go vote as a form of protest or frustration. I don’t think that will be many and I don’t find that to be productive.”

While many Republicans are concerned, it’s not yet clear what sort of impact the conspiracy theories will have on voter turnout.

‘But we have seen it be exacerbated in this particular election,” said David Lavine, a fellow with the Alliance for Securing Democracy, part of the German Marshall Fund of the United States. “One of the things that was interesting about the November general election is that we saw such high turnout in spite of the vast amounts of false information.”

In front of the Georgia capitol, surrounded by American flags and pro-Trump merchandise, Missy Landers said she still plans to vote next month.

“It is my right as an American citizen to vote and I’m gonna honor that right by voting,” she said.

Republicans will have to hope her faith in the system remains solid enough through Election Day on January 5.